HomeEye Surgery A stranger gave me back my sight

A stranger gave me back my sight 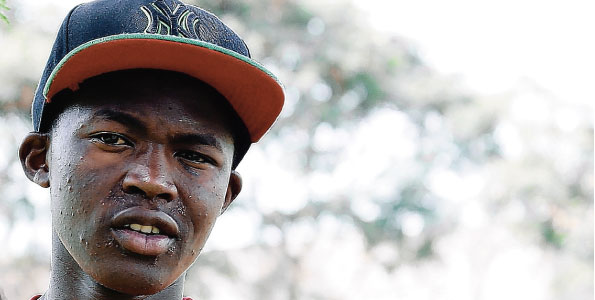 Five years ago, while Nemuel Ngoiyo was preparing to sit for the Kenya Certificate of Primary Education, something strange happened to his eyes.

He could no longer see the blackboard from the back of the class, where he sat, and unless he held his books very close to his eyes, he could not read. The strain gave him blinding headaches.

When he went to hospital, he was given eye drops and a prescription of eye glasses, but the relief was slight. Nonetheless, he scored 426 marks out of 500 and joined Starehe Boy’s Centre, Nairobi. Meanwhile, his sight, especially in his left eye, continued to deteriorate steadily.

“Everything I looked at with my left eye was a watery blur,” he remembers. His visits to various eye clinics in Nairobi did not help. As the year progressed, his performance and his sight got worse.

“He found it difficult to study for long periods, and could not play his favourite game –basketball, since he could not see the ball. In August 2008, Nemuel was finally diagnosed with keratoconus at the Kenyatta National Hospital and referred to PCEA Kikuyu Hospital eye unit for a cornea transplant.

Keratoconus is degeneration of the structure of the cornea, the clear dome-shaped tissue covering the front of the eye. It causes blurred vision and sensitivity to light, making activities such as reading and driving difficult.

At Kikuyu Hospital, he was informed that while he needed a cornea transplant in his left eye before January the following year, the hospital’s eye bank had no corneas.

Worried that his son would lose his eye, Nemuel’s father Daniel Wagura, offered to give one of his corneas, but he was informed that this was not possible. “The doctors told me that I would have to be dead first to qualify as a donor,” Mr Wagura Explains.

Nemuel was was given two choices:to be placed on the waiting list and be prepared to wait up to two years for a cornea, or travel to India to have the transplant. With no money at hand to travel abroad, Nemuel returned to school. The next day, he woke up to a frightening discovery.

“A classmate informed me that my left eye had turned blue. He wasn’t joking – when I looked at myself in the mirror, my pupil was no longer black, it was blue.”

The following day, both his eyes begun to water uncontrollably, and to make matters worse, his left eye suddenly bulged out, and looked as if it was about to fall off.

Alarmed, his parents got a loan from their Savings and Credit Co-operative Society and held an impromptu harambee, managing to raise Sh300,000.

The following week, Nemuel and his father flew to India, where a cornea transplant was done. This cost about Sh100,000. The right eye, which had begun to develop signs of keratoconous, was also treated using a procedure called cross-linking, combined with laser vision correction to prevent deterioration. This cost the family about Sh10,000.

Nemuel fears that he would be blind today had it not been for the person who donated his cornea. Thanks to this stranger, Nemuel can now lead a normal life and do all the things he enjoys with ease.

“Before the transplant, I had given up on ever playing basketball again, or swimming, because my eyes would itch so much afterwards. I also could not read for more than 15 minutes without getting a headache. Now I can do all that.”

Nemuel, who scored 65 points in his Kenya Certificate of Secondary Education last year, hopes to study biomedical engineering and intends to donate all his healthy organs upon his death.

“Organ donation had never crossed mind, but after receiving this cornea which gave me back my life, I plan to donate every organ that can benefit someone in need after my death,” he says.

What the law says

Laibuta Mugambi, an advocate of the high court, says that potential organ donors can only do so with ease after the draft Health Bill becomes law.

Part 14 of the bill gives extensive guidelines on organ and tissue donation, allowing organs from live donors to be used for prescribed medical or dental purposes. However, organs cannot be removed from a person who is unable to give consent, or from one who is under 18 years, if the tissue cannot be replaced by a natural process.

Currently, organ harvesting from dead donors is a grey area, legally. The Human Tissue Act allows for harvesting of organs from a dead person for scientific research or medical treatment.

Such a donor must have pledged to donate his organs in the presence of two witnesses. However, the Act gives the dead person’s relatives a right to object to the harvesting.

Thus, as Nation Media Group’s legal officer Sekou Owino explains, the promise to donate one’s organs is not enforceable, since it could be rejected by the dead man’s relatives.

However, the proposed Health Law specifies that as long as a potential donor pledged orally or in writing, in the presence of two witnesses, then the organs can be removed as directed.

This law would potentially save many lives, if only Kenyans would pledge to donate their organs after death.

We value our dead, more than the living

Dr Francis Kerre, a medical sociologist at the Kenyatta University, says that while in the West people are more open to organ donation, Kenyans may not be similarly willing to embrace organ donation.

“In our context, a dead person is sacred and is valued more than the living. Organ donation would be seen as a violation of the dead and few people would want to tamper with the dead since it might attract curses or exclusion from the community,” Dr Kerre explains.

The sociologist adds that a belief in life after death compels the living to bury the dead intact. However, Dr Kerre argues that those who do not believe in life after death, like him, would rather not take vital and healthy organs to the grave, but instead, would rather have them distributed to those who need them to stay alive. But convincing potential donors to part with their organs is very difficult.

Transplants not affordable in Kenya

In Kenya, there are two eye banks, which source their corneas from foreign donors in Asia and America at a cost of Sh300,000 to Sh500,000 per cornea, making it expensive to get a cornea transplant done in Kenya. Opthamologists say that if more Kenyans pledged their corneas, the cost of transplantation would go down.

Kidney transplants are by far the most sought after in the world, and in Kenya, these are performed using kidneys from live donors.

Patients with renal failure are required to identify a living relative who will donate his or her kidney and save them from life-long dialysis – an expensive procedure used to clean the blood of toxins.

A close relative is preferred to reduce the risk of organ rejection. However, even close relatives have difficulty parting with a kidney.

Davine Nyarera, the nursing officer in-charge of the renal unit at the Kenyatta Hospital, admits that while it is cheaper to have a transplant than to go for dialysis twice a week for the rest of one’s life, getting a donor is not easy, particularly because of the myths surrounding organ donation.

“Some people believe that a male donor might become impotent, or a woman may become infertile after donating a kidney. Others worry about falling ill in the absence of one kidney, and it is difficult to convince potential donors that they can still function normally with one kidney,” she says, and adds, “There are also cases where a person agrees to donate a kidney, but changes his mind along the way. It would be inhuman to tell the patient this, so we just tell them that the donor did not qualify,” she says.

But with a willing donor at hand, it takes a minimum of three weeks to have the prerequisite health checks and counseling done for the kidney to be transplanted at a cost of Sh500,000.

Ms Nyarera believes that once a law on organ donation is put in place, a pool of dead donors will help save the lives of suffering patients. But first, hospitals will need to set up organ banks where the donated organs can be stored for use.

Consultant Pathologist and Assistant Director in charge of laboratories at Kenyatta National Hospital, Dr Andrew Gachu, says that while Kenyan doctors have the capacity to harvest and transplant organs, there is no system of harvesting organs from people certified as brain dead.

“A system of organ harvesting is long overdue as it would prevent deaths of patients who could get a few more years of life after receiving an organ. We also need organ banks where we can store the organs, as well as regulations to avoid abuse,” he says.

The proposed Health law forbids the sale of organs. It states that one cannot receive financial or other rewards for donating an organ except to reimburse reasonable costs incurred by him while donating an organ.

Anyone who is found guilty of selling or trading in organs or blood and blood products will be fined Sh100, 000 and, or be imprisoned for up to an year. Most organs have a two to four-hour window period within which they can be harvested and stored for transplantation.

In developed countries, there are national organ registries, where one can register their pledge to donate an organ. Hospitals alert organ organisations of all deaths to confirm if the dead person had registered as a donor.

If one dies outside a hospital, the family members can alert the organ donation organisation if they know that the dead relative had pledged to donate his or her organs.

This article was first published in Nation Newspaper